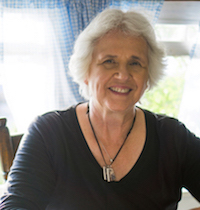 
Author Barbara Eppich Struna moved from Ohio in 1988 to Brewster on Cape Cod with her husband Timothy, a professional artist, and their children. Together they established Struna Galleries–Brewster. In 1998, their daughter, Heather Struna, opened Struna Galleries–Chatham and maintains a dominant presence on Chatham’s Main Street representing her father’s work.

After many query letters, she was finally offered a contract in 2012 from Booktrope, a Seattle Small Press, for her historical fiction, The Old Cape House. It was a new tale about the 1717 Cape Cod pirate, Captain Sam Bellamy, his ship Whydah, and lover Maria Hallett. This first novel was awarded Best Historical Fiction in Royal Dragonfly Awards 2016.

Her second novel, The Old Cape Teapot was published in October 2014 by Booktrope. The story of Sam and Maria in 1720 continues as contemporary Nancy Caldwell follows the paths of two Whydah pirate survivors from Antigua to Cape Cod.

In April 2017, her third historical fiction, The Old Cape Hollywood Secret became available across all sales channels.  This suspenseful novel takes place in 1947 and current day. Maggie Foster and her cousin Gertie leave Cape Cod for glamorous Hollywood, one returns home with a secret, the other disappears only to be found seventy years later by present day amateur sleuth Nancy Caldwell.

Beginning in August 2017, The Old Cape Hollywood Secret was awarded:

Author Barbara Eppich Struna is fascinated by history and writes a blog about the unique facts and myths of Cape Cod.  Besides being a storyteller at heart, she is currently a Member in Letters of the National League of American Pen Women, International Thriller Writers, Panelist Thrillerfest 2016, Sisters in Crime - National, New England and LA, President of Cape Cod Writers Center, and two writing groups.