As I walk the sandy beaches and wooded pathways of Cape Cod, I'm on the hunt for interesting finds. I never go home empty handed, there's always something that peaks my curiosity. 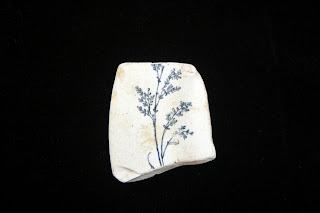 I found this little beauty dating from the late 18th or early 19th century and probably from a dinner plate, on one of the bay side beaches over 20 years ago.  On that summer day, I walked a little further across the open tidal flats of Brewster and with each step I took, inspiration for my novel began to weave itself into my thoughts.  Since then, this little pottery shard with its smooth, chalk-like surface and dainty flowers has taken me and my imagination along a journey of reading, researching and writing the legend of Sam Bellamy, Maria Hallett and other myths of Cape Cod. There isn't a day that goes by that I don't think about it. 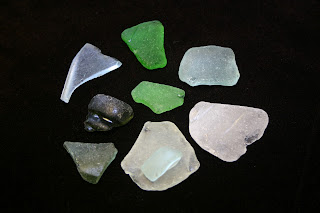 Over the last five years of my 24 on this sandy spit, my collection of shells, shards and treasures has grown so much that I'm forced to become more particular in what I bring home. Beach glass, too numerous to count, fills a small four-drawer dresser in my closet; plastic baggies separate them into hues of blue, red, brown, turquoise, lavender and white. It takes from 50 -100 years or longer in the ocean for sea glass to cure or obtain that milky glaze and smooth surface. These transparent treasures must be 'well-done' to become part of my collection. I always step over the shiny beach glass, saving them for future beachcombers. 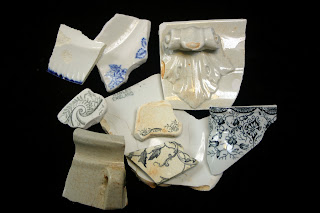 Decorative or colorful patterned shards are my most prized. It's such a treat to find them with handles, ornamentation or words on the pieces. I have several with 'England' on them.  The scallop edge was a popular style on dishes in 1700 England and continued through the early 1800s. By the 1850s, this pattern developed into a painted symmetrical shell edge, then progressed even further into impressed lines that replicated the painted scallop edge. The piece top left has an impressed shell edge on it. 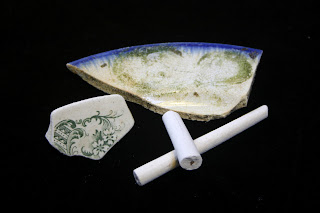 The large shard above shows a painted scallop edge. The green circular marks are from small clams or oysters that were living on its surface when I found it wedged in between two rocks at low tide. The green floral patterned shard was discovered the same day.  The clay pipe stems, based on the size of the hole in the stem, are circa 1700-1800. They were found by Tim in Provincetown Harbor - a real find! 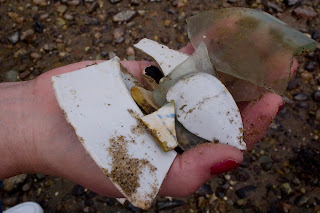 A few years ago on a day excursion with Anna and Michael, we visited and searched Plymouth Harbor at low tide. The items shown are in their natural state. It only took us about an hour to find our treasures. 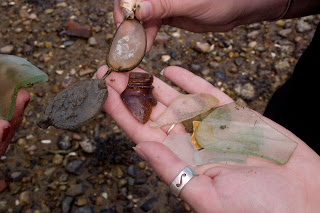 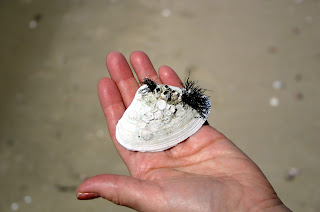 This clam with its barnacles and seaweed make an artistic statement - perfect for a still life painting. 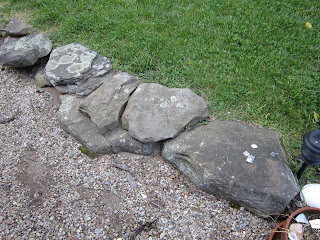 It's been over a year since my son, Scotty, married his beautiful Carly at our home. At their wedding reception, they invited their guests to write a one year anniversary message on a card, whereupon the cards would be kept unopened for one year. A week ago they opened them. Scott called to tell us that the messages were heartwarming, funny and all wished the wedded couple more happiness for the coming years. He added that one card was intriguing, its sender wrote that he had left the happy couple something under the rock wall behind our house on the Cape.  Scott then sent me on a mission. "Mom, would you go and look? He said it was under the third rock from the porch door."
I went outside with phone in hand.
I could hear Scott over the phone telling me, "I'll skype you when Carly gets home, mom. Don't touch anything till then. " 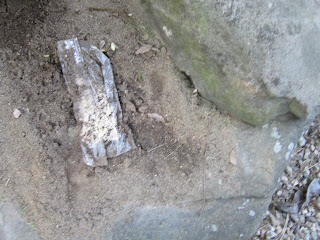 Of course, I checked to see if it was a joke or if something was really there and it was... and under rock number three! I replaced the rock and waited for Scott's return call. 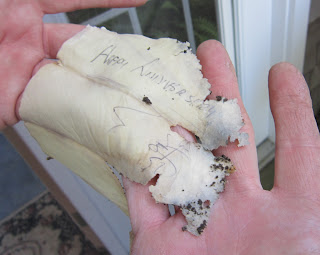 Within minutes, he called back. Our youngest son, Michael, offered his IPhone to skype. As the anniversary couple watched us unearth the mysterious message via Wi-Fi, anticipation filled the air both on Cape Cod and in California.
Due to a small hole in the plastic baggie, the card was wet and half eaten but the secret message from his friend was clear. It read, "Happy Anniversary!"

Like I always say, mystery and history surround us in our daily lives, but only if we look for it.

Posted by Barbara Eppich Struna at 7:30 AM 2 comments:

Sam Bellamy, aka 'Black Sam' and 'Prince of Pirates', was a real pirate from the 1700s.  Born in England, his life has been documented through official records and ships logs.  A National Geographic special, entitled, Real Pirates was produced in the spring of 1990 featuring Barry Clifford's 1986 discovery of the wreck of Bellamy's ship, the Whydah, off the coast of Cape Cod.  Always a mystery, the unearthing of the Whydahs’ bell by Clifford was the key to prove the legend to be true. It also increased the aura that surrounded this handsome rogue and added another piece to the puzzle of Sam Bellamy. This past April 26 marked 295 years since the sinking of the Whydah. 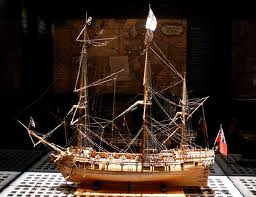 The Whydah, photo courtesy of the Exhibition Whydah website. Here is a link:
http://whydah.com/whydah-museum/

This video is interesting.
/http://video.nationalgeographic.com/video/national-geographic-channel/all-videos/av-5991-6255/ngc-the-whydah-bell/

This is fun to explore!
National Geographic's link:
http://www.piratesexhibit.com/ 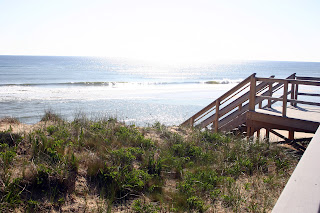 Marconi Beach in Wellfleet, near where the wreck was discovered, is a beautiful and scenic vista. Erosion has eaten away at the cliffs but gives you a glimpse into the desolation and danger of running afoul in a 1717 nor'easter. This picture was taken April 26, 2012. 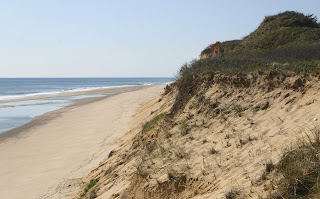 A high dune at Marconi resembles the one that Maria Hallett watched from, as she waited for her Sam. According to one of the legends about her, she cursed all sailors that sailed by the coast because her lover never came back for her.

Maria Hallett, allegedly the mistress of Sam Bellamy, has never been proven to actually exist. But for over 295 years, she has lived in the minds and superstitions of all Cape Codders.  According to legend, when Bellamy had enough gold and booty after years of plundering along the Atlantic coast and the West Indies, he and his fleet headed to the coast of Maine. No one knows why he turned off course towards the tumultuous coast of Cape Cod that fateful night of April 26, 1717. It might have been that he wanted something that was his…or could it have been for the love of a woman named Maria Hallett. 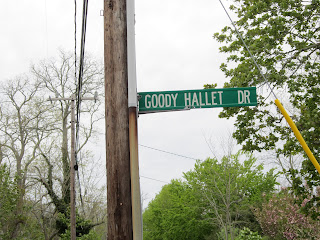 To some Cape Codders Maria Hallett is a myth; to others she was very real. Here is a street in Eastham named for her. Either it was for fun or they wanted to make a statement, further perpetuating her myth. Besides being called Maria Hallett, she was also known as 'Goody Hallett' and the 'Witch of Billingsgate', an island that disappeared off Wellfleet.

In my historical novel, I take Maria's legend and tell her story the way I think it could have happened using the true facts of Sam Bellamy. No one knows for sure what ever became of Maria, for all I know, maybe my story is what really happened.

Posted by Barbara Eppich Struna at 12:22 PM No comments: